SECTION ONE: Cross breeding and fear of Inbreeding

One of the great strengths of the Dog Brothers is that we have different clans. Dog Brothers are spread around the United States, Canada, and now Switzerland (and Spain is under consideration) and those who train with a particular Dog Brother and become the clan of that area under his leadership. Thus, each clan develops its own distinctive flavor.

But it was not always so.

from Black Belt Magazine
LOS ANGELES-Marc Denny, also known as “Crafty Dog,” is, along with Eric “Top Dog” Knaus, co-founder and head instructor of Dog Brothers Martial Arts Inc. At 6-feet-l-inch and 190 pounds, Denny cuts an intimidating figure as he wields his single or double sticks in the face of oncoming attacks by a fellow “Dog Brother.” This interesting and extremely effective system has been turned down by the Ultimate Fighting Championship as “just too extreme.”

At their Gathering of the Pack, an event that has been held semi-annually for eight years, the Dog Brothers and other martial artists test their skills in “real-contact” stick fighting. This, according to Denny, is basically a Vale Tudo-version of Kali with one or two sticks. Denny says there are only three rules: “Use any attack you can think of, be friends at the end of the day, and no suing no one for nothin’ no how, no way!” The credo of the Dog Brothers is “higher consciousness through harder contact.” ? The term “real contact” is used to distinguish it from “full contact,” which usually means one or both fighters and/or the sticks are padded and some techniques are prohibited. 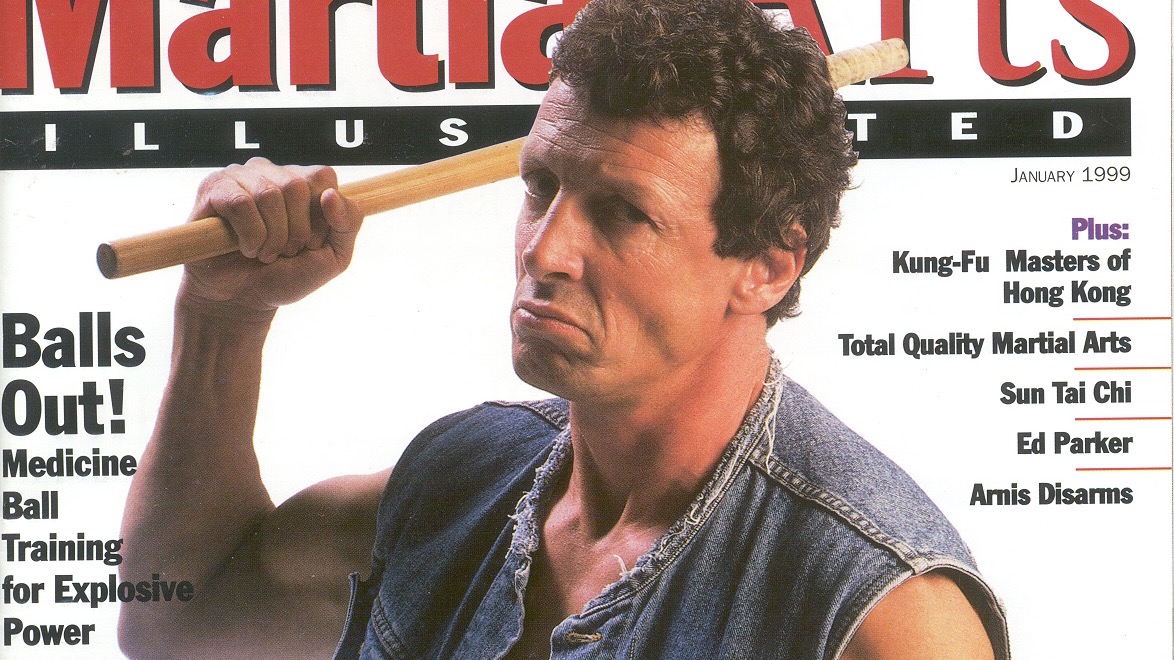 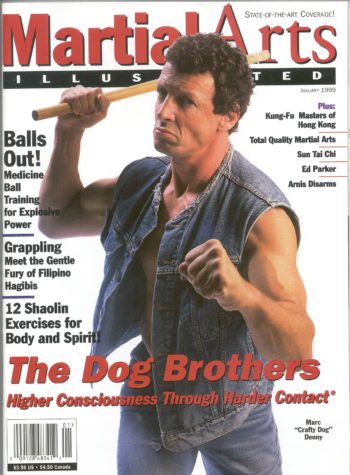 The Dog Brothers. An unusual name to be sure, but after watching these guys in action it’s obvious that they run on a different octane of testosterone than others of their species. The Dog Brothers claim to fame is that they beat each other to a pulp with hard rattan sticks for fun. “Real Contact Kali” is the name of their game and they play it for real. They use the term “Real Contact” to distinguish themselves from tournaments that use the term “Full Contact” but the fighters and/or the ticks are padded. In the early days of the Ultimate Fighting Championship, before there were rules, the Dog Brothers were approached by the UFC about participating in a special weapons event to be held between the semi-finals and the finals. There were extensive conversations held. Eric “Top Dog” Knaus, the group’s best fighter, would have carried the flag for the Dog Brothers. But after seeing the Dog Brothers in action, the UFC had to pass. In a letter to Marc “Crafty Dog” Denny, the group’s guiding force, they wrote:

from Men’s Fitness, by Marc Jacobs

Iron John? Big wuss. Real me, say the Dog Brothers, beat the crap out of each other with 30-inch clubs.

Underdog is flailing away at Dog Steve with a pair of 30-inch sticks before the watchful eye of the Crafty Dog and his canine cohorts. “Stop backing up!” Top Dog orders as Dog Steve charges forward, slashing his club at Underdog, who is backpedaling furiously in an attempt to avoid massive head trauma, broken bones or a kidney-popping thrust into his bare body.

written by Marc “Crafty Dog” Denny What follows is a reworking of something that was originally posted on the Eskrima Digest on the subject of trapping. It began with a good question, a slightly edited version of which follows: “, , , , In short, Burt Richardson (and some others I know) seem to doubt … Read more

Several years back, a man I had fought at a “Dog Brothers Gathering” went out behind his school and blew his brains out. He was involved in intense law enforcement work and I was told that his marriage was ending. He left two daughters and a separated wife.

He was a part of the extended Inosanto Tribe as well the Dog Brothers tribe and so I mentioned it to Guro Inosanto. He was surprised, and instantly exclaimed “How could he have done that? He had his Art!”

written by Marc “Crafty Dog” Denny The days before the fight are always a powerful crucible. I have a non-martial art teacher who when someone seeks to leave a situation that makes them uncomfortable says, “Whatever you do, keep on being here in this moment.” I may not have the quote exactly right, but I … Read more

written by Marc “Crafty Dog” Denny In DBMA, we have a considerable emphasis on developing both hands ability to work individually and in non-symetrical coordination with either hand be able to function as the dominant one. Through my exposure to NLP and a random sermon by one Rev. Terry Cole Whittaker caught while surfing one … Read more

written by Marc “Crafty Dog” Denny Recently there has been a push in the State of New Jersey to regulate martial arts. Originally it was pushed as protection from child molesters, but when it was pointed out that if that were the case then those regulated should be all who dealt with children, not martial … Read more