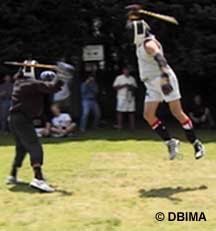 Clearly, I don’t have the martial arts background that most of the Dog Brothers possess. Nonetheless, I have been bestowed the honor of being a member of this notable tribe– of being “Hotdog”.

Hotdog’s first martial arts class was in sixth grade where he dabbled in Shotokan – a Japanese Style.

Hotdog then, after getting his ‘bells rung’ by a large kid in high school, enrolled in the local Tae Kwon Do school. Hotdog liked Tae Kwon Do very much and he learned to kick people – primarily in the head.

Hotdog earned the level of brown belt and was convinced that this was a great accomplishment and was certain everyone else thought so as well.

Then after years idle activity, Hotdog met Marc “Crafty Dog” Denny, Co-founder of the Dog Brothers. Crafty showed Hotdog the Filipino art of Kali. Hotdog thought Kali was good but lacked kicks to the head. Hotdog had not yet connected with the concept of zoning, slashing, stabbing, slapping, punching, kneeing, elbowing and decapitating – as he matured he learned to appreciate these things.

Then one day, while working as a camera man at Punong Guro Edgar Sulite’s studio while Crafty was taking a challenge match on behalf of Lameco, Hotdog was lulled into his first stick fight. What a rush …..

Guro Crafty, seizing the moment, convinced Hotdog that he was truly God’s gift to stick fighting. Hotdog, of course was eager to believe this and readily signed for the next gathering where he fought for REAL – ouchhhh!!! Salty Dog hits REALLY hard – believe it …..

From then on I got real about the martial arts, my training (including some Machado Jiu Jitsu) and my fighting capacity. This is what fighting at the Dog Brother’s gathering does for the individual. It’s a reality check!!! And sometimes REALITY MATTERS.