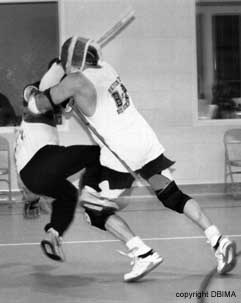 Tao of Dogzilla-When Michael was a teenager. He meet a young man nicknamed Dust In The Wind. We were a group,of kids called The Brother’s. At the time we lived in Orange County, California. Our beloved friend introduced us to Jeet Kune Do. My Brother began to teach me how to protect myself against the Enemy. My Brother showed me how to utilize my long leg’s. By kicking the Enemy. We would also enjoy listening to Rock-and-Roll records, while drinking Lucky Larger beer in his garage. Bruce Lee posters, lined the walls to this garage.Many years have gone by. After being Honorable Discharged from Active Duty in the United States Marine Corps. Michael found him self working in a Federal Prison. This Marine needed to become more proficent with Crude Weapons. By God’s fate Michael was introdued to the Dog Brothers. For more than a dozen years, Michael has trained and fought with the Dog Brothers.

It has been an Honor to meet these Men.
The Teachers that have taught Michael. Turned him into Dogzilla. All of my Brothers and Uncle’s. Have had a lot of patience. This Marine wanted to thank his friends for showing him the True Way. Dogzilla is being transfered to the Island of Oahu, for work.

Dogzilla will continue to grow as a Human Being. By utilizing the gifts he was taught. This Man can not express enough into words. What this ment to him. This Marine will carry on the Tradition’s of the U.S.Marine Corp’s and the Dog Brothers. Wherever he may be. God Bless all of my Brother’s and their Teachers. Because together, We are Dust In The Wind!

To Sir With Love.