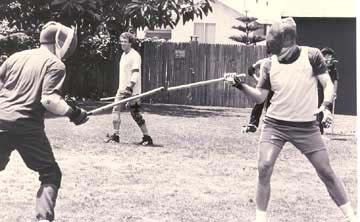 I am often asked about the our name, “the Dog Brothers.” It can be explained on many levels, but one of my favorite ways of looking at it can be found in a newspaper article by one Jeff McMahon:

“Most actions of men can be explained by observing a pack of dogs. Not wild dogs, just neighborhood dogs who all scurry under the fence on the same night and set off together to reclaim a glimmer of the glory their species possessed before domestication.”

I think that’s right. The dog is the interface of man and the wolf and we can connect so strongly because our dynamics are so similar. Even as we change the wolf into the dog to suit our purposes, we still need its glimmer as wolf. In some breeds, and in certain individual dogs, the glimmer is brighter than others, and that is why you see an Akita named Zapata in our logo.

I know the Dog Brothers have a good reputation for airing it out pretty well, but we know what we do is well short of combat, death matches of yore in the Philippines, or a policeman going into an abandoned building after a bad guy. It is important not to take oneself too seriously, and I like the way the quote captures a certain perspective on the Dog Brothers. We are not wolves, we are but human dogs.

Still, it is important to be aware of something else too. Yes we are but a pack of dogs, and just like dogs we have territory, and hierarchy, and squabbles over the , , , females. But there is something more. Just like dogs, there is the bond of the pack.

Aggression is an instinct, even as sex is an instinct. And just as a man eventually will have a nocturnal emission in the absence of sex, so too aggression will discharge eventually even in the absence of “legitimate” cause. Thus all efforts at eliminating the causes of aggression can be seen in scientific terms as inherently doomed efforts to prevent a instinctual discharge by means of eliminating its typical eliciting stimuli. To the extent that the efforts to eliminate the eliciting stimuli succeed, the discharge of the aggression becomes less predictable and often more dangerous. Skill in aggression will be needed from time to time, especially by those lacking skill and will. The solution is to ground aggression in a ritual expression that also prepares it for functional application.

Aggression has three purposes in nature. First, to spread a species out over territory so as to not overload an eco-system. Amongst humans this is called “war”. Second, for rank within the hierarchy of a social group. All social groups have hierarchy. And third, for reproduction. Classically this means two males fighting over the female, but it also means the female defending her young. If there is no social unit, e.g. Siamese fighting fish, it does not matter that the loser dies, only that the winner breeds. In contrast, in social animals, there is a strong biological benefit if the second and third types of aggression do not damage the loser. This is so that the social unit, (the pack/the tribe), which exists precisely because of its survival value, remains strong.

Most martial arts are usually of the second type of aggression, with overtones of the third: Young males competing. In contrast, the Filipino Martial Arts originate in the first form of aggression, in war. Thus there is a quality of cooperation in the learning process of the FMA that can be distinctive.

How so? If, as a tribe we are going to defend our land, women and children, it is in our respective individual interests that the other warriors of the tribe become good fighters as well. If I push you too hard and break your spirit, it does not serve my interests. If I push you too little and you are soft, it also does not serve my interests. And vice versa.

Dog Brothers Martial Arts is the name that I put to the system of many styles that I have evolved out of what my teachers have taught me, the fighting experiences of all the Dog Brothers and my teaching. Why give it a name? Because to call it something else would be inaccurate. It is its own unique thing.

Why a “system of many styles”? Because fighting is like the children’s game of “rock, paper, scissors” and no one style is for all situations and opponents-not even Top Dog’s style-and in my opinion he is the best stickfighter of our time. Bruce Lee spoke of “No way as way”, and similarly, Sugar Ray Leonard once said “You don’t beat the man, you beat his style.” In other words, you beat him where he has a way. Thus, we seek to specialize in generalizing; the goal being that no matter the situation, we have a game to play instead of a way. DBMA draws upon all the Dog Brothers and those with whom we have fought, and those with whom we have trained. And it is a system because I think we have a coherent way of imparting certain knowledge, understandings, training methods, skills, attributes and techniques towards certain goals.

Many martial arts discuss how there are different mindsets/qualities with which one can defend/fight. Often the names are a bit poetic; Fire, Water, Wind, Rock, Earth, etc. but the point is made that the more realized the fighter is, the better his ability to fluidly shift between them. To be able to do this in the intense adrenal state of a fight is an subtle and evolved thing. Paradoxically, the mental state of Play is the state where this happens best. The further one can enter into the dichotomy of Fight and Play simultaneously, the better. The best fighting is done where the fight is play. Thus, in DBMA we say “Do not have a Way as you Play. Fight the Way you Play. Let your Fight be Play.” To experience this is transformational.

“What Is Play?” in evolutionary biological terms is an interesting question in its own right. It is a state in which deep learning takes place and the training methods of the FMA are of a high order in creating it and teaching it as part of the learning and training process. The competitiveness natural between men can easily kill Play. Abecedario, numerado, sombrada, and carenza are methods with a thousand faces and all help create Play. The process of learning in the FMA way develops powerful understandings and skills for dealing with people outside of a fighting context.

The three FMA teachers from whom we draw most are Guro Dan Inosanto (Inosanto LaCoste Blend) Grand Tuhon Leo Gaje (Pekiti Tirsia Kali) and also Punong Guro Edgar Sulite (Lameco Eskrima). We draw from other FMA teachers and systems too. And we draw from outside of the FMA as well, usually within the framework of the Majapahit Empire.

What’s that? Centuries ago, political boundaries were different and the Philippines, Indonesia, Malaysia, and Indo-china were part of what was known as the Majapahit Empire. Martial arts from this part of the world tend to have, to use a JKDC term, “common thread” with each other, i.e. there is a shared internal coherency. Thus we can draw from Krabi Krabong from Thailand and it fits. (In this area our lead man is Ajarn Arlan “Salty Dog” Sanford.) We can take from Silat (Pendekar Paul Dethouars) or Bando (Dr. M. Gyi) whatever fits, and so on. We also take from Brazilian Jiu Jitsu (the Machado Brothers), because it works, because little of FMA grappling (dumog, buno, etc) has made it to the US, and because chauvinism is counter-productive to the search for Truth.

Most martial arts are basically young males competing. Though we certainly have that too, the idea of DBMA is of a lifelong martial art. Although the Dog Brothers are known for “Real Contact Stickfighting”, DBMA uses the vehicle of learning to fight this way as a means of creating a man who can walk through the entirety of his life as a warrior in his world today.

NOT EVERYONE SHOULD DO REAL CONTACT STICKFIGHTING AND ONLY YOU DECIDE THAT. IT DOES NOT MEAN THAT YOU ARE A KITTY IF YOU DON’T. Whether you do or do not, our mission is for you to learn to fight well for real. Someone with this training should be able to handle himself proficiently in real time with sticks, clubs, knives, staff, improvised weapons and empty hand in all ranges. He should have skills and intelligence for multiple player situations. He should have a clear sense of what he can and cannot do, and be able to assess situations and people well. He should be seasoned in handling his adrenaline and know for what he fights and for what he does not. He should be fit and healthy. This is whether he is a younger man, a middle aged man, or an older man.

And for each of these there is short, middle and long term training, which should be done together in an ever changing blend. One should not try to live permanently in the testosterone frenzy of getting-ready-for-a-fight training, but one should always be of a level of fitness able to apply maximal effort without notice. One needs to train for now and for over the years. This promotes physical, psychological, emotional and spiritual health as well as fighting skill.

To last over the years, one needs to be intelligent-the secret of life is to get smart faster than you get old. If we try to always operate in that young male testosterone frenzy, just like Bruce Lee we’re not going to last very long. In training, there must be the “three Fs” (Not those! Baaad Dogs!) Fun, Fit, and Functional. To be functional, we must be fit and healthy, and what we do to be fit and healthy must be fun to do or we will not do it. Now, “fun” can be a superficial word, but what we really mean is with joy in life-but that would have ruined the alliteration.

The Knowledge that we study of another time and place must serve this time and place. There is the martial and there is the art. As Wild Dog’s daughter Keelin once said to me “Art is the repository of the human wisdom which cannot be expressed in words.” Both the martial and the art are necessary, just as the yin and the yang are necessary to the Tao. The further one can go into each simultaneously, the greater the dichotomy, and the deeper the transformation. Higher Consciousness through Harder Contact.